Khnum’s Emnity is a First Person Egyptian game that I and 2 friends – Tylar, who made the assets using Blender, and Jesi, who made music and sound effects with FL Studio – made in the 2017 Kansas State University Annual Game Jam. Under the moniker of ‘Armchair Factory’, we hammered this out in 48 hours for the Jam’s theme “Inundation”. Download Link.

The project was made in Unity, and it was the first time I had used it to make something from scratch (having only experience with some tutorials beforehand) and the first time my friends Tylar and Jesi worked with me on anything. 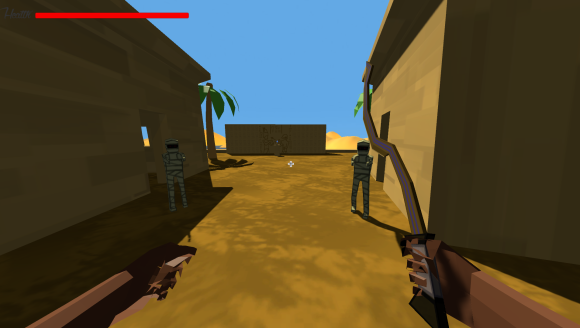 After being given the theme, I thought about how to express it in a game environment. I did some research and came up with Egypt and how the Nile River would inundate the land annually, leading the Egyptians to create gods and legends about these seasons – one of whom was Khnum, the god of Inundation himself. I talked with my teammates about the idea and started a small design document in a notebook, scoping out the project into something that could be done over a weekend. I made a list of the few props we would need and gave them to Tylar – who himself was up for a challenge after a short, casual relationship with modelling prior to the project – leaving Jesi to her own devices in making the music and sound effects as I thought we wouldd need them.

The project had its ups and downs. Through the beginning I was uncertain in the game being any fun at all – without time to polish the game, we’d be working on barebones features that I wasn’t wholly confident in programming. In addition, the workflow was choppy for much of Saturday as Tylar was trying his hardest to rig and animate our only enemy, something that left me struggling to find something to do with the almost zero assets to work with. Eventually he got it done, eventually made stuff faster than I could program it, and everything went smoothly for the final day as more of the project came together. 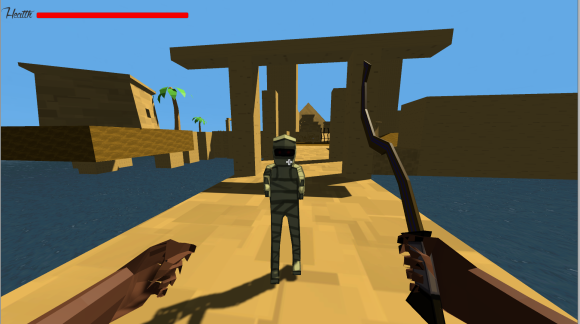 In the end, it only won the unofficial “Best AI” award (but also going on to get Most Downloaded), which was pretty disappointing after all the work we’d done. Score sheets showed that many of the judges had issues with the audio with this game and it didn’t get any points from anyone for it, which is pretty sad, considering the amount of work Jesi put in. Luckily, and of course, for no apparent reason, it worked fine for me and all of my friends, and our team was rewarded with a good time as we shared the game with them and watched them completely break it and compete in speedruns.

As a game jam game, I’ll respect the sanctity of what it is by never working on it afterwards, but if I had to improve it or polish it in some way, I’d probably spend more time on hit detection, AI, and an actual working menu system (which I feel was the biggest thing missing from the game).

It was a learning experience for us all, both in teamwork and technical expertise. We all came out of respective software more skilled than we went in and nailed the general workflow pretty well. For our first time working together, everything went pretty smoothly, showing to us there was potential for working together in the future.